Yom HaZikaron (Israel’s Memorial Day) and Yom Ha’Atzmaut (Israel Independence Day) are modern holidays which have been added to the Jewish calendar since the establishment of the State of Israel in 1948. In Israel, these days are observed as national holidays; around the world, they are observed in various ways by Jewish communities.

In 1963, the Israeli Knesset (parliament) established the day that precedes Yom Ha’Atzmaut as YomHaZikaron, a day to memorialize soldiers who lost their lives fighting in the War of Independence and subsequent battles, as well as a day to remember civilian victims of terrorism. Scheduling Yom HaZikaron right before Yom Ha’Atzmaut is intended to remind people of the sacrifice soldiers and their families and friends have paid for Israel’s independence and security. The transition demonstrates the importance of this day among Israelis, most of whom have served in the armed forces or have a connection with people who were killed during military service.

Yom HaZikaron begins with an official ceremony at the Western Wall, as the flag of Israel is lowered to half-staff. Places of entertainment are closed for the day by law and radio and television stations broadcast programs about Israel’s wars. Air raid sirens are sounded twice in Israel during Yom HaZikaron; the first siren marks the beginning of Israel’s Memorial Day at 8 p.m. Israel time, and the second is sounded at 11 a.m., immediately prior to the public recitation of prayers in military cemeteries. During the sirens’ soundings, the entire country comes to a complete stop: bulldozers are turned off, cranes hang empty in the air, and cars get parked on the sides of streets as their occupants get out of them stand silently alongside their vehicles.

Numerous public ceremonies are held throughout Israel, including a national ceremony at the military cemetery on Mount Herzl, where many of Israel’s leaders and soldiers are buried. Schools and public buildings often hold memorials for those from their community who died in Israel’s wars. In the evening, at the official ceremony of Israel Independence Day on Mount Herzl, the day draws to a close when the Israeli flag is returned to full-staff.

Yom Ha’Atzmaut marks the anniversary of the establishment of the modern state of Israel. It is observed on or near the 5th of the Hebrew month of Iyar on the Jewish calendar, which usually falls in April. On May 14, 1948, soon-to-be Prime Minister David Ben Gurion declared the independence of the State of Israel, which was recognized by the United States, the (then) Soviet Union, and other countries, although not by the surrounding Arab states. 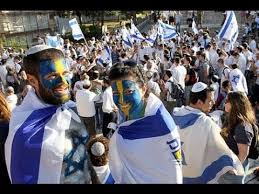 Yom Ha’Atzmaut festivities begin the evening before the holiday, as soon as the flag is raised to full-staff and Israelis take to streets throughout Israel to attend outdoor concerts, parties, and barbecues, and to watch fireworks displays. Friends and families gather together the next day, usually outside or at nature reserves, museums, and other attractions, which are open to the public free of charge for the day. Also on Yom Ha’Atzmaut, teens compete in the country’s Torah championship, and the Israel Prize, the country’s highest honor, is awarded in a formal ceremony in Jerusalem to individuals who excel in their chosen field.

On the evening of the holiday, celebrants and officials gather at Mount Herzl in Jerusalem for a ceremony that includes speeches and a parade of soldiers and concludes with the lighting of 12 torches, representing the 12 Tribes of Israel.