Tu BiSh’vat, or the “New Year of the Trees,” is the Jewish Arbor Day. 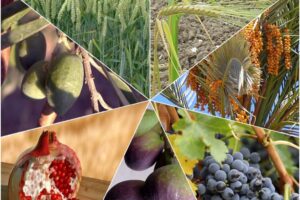 Observed on the 15th (tu) of the Hebrew month of Sh’vat, Tu BiSh’vat falls at the beginning of spring in Israel, whenthe winter rains subside and the pink and white blossoms of the almond trees begin to bud. It is for this reason that almonds and other fruits and nuts native to the Land of Israel – barley, dates, figs, grapes, pomegranates, olives, and wheat – are commonly eaten on this holiday.

Tu BiSh’vat is first mentioned in the Mishnah (part of the Talmud that focuses on laws). There, in RoshHaShanah 1:1, the text speaks of four different new years, all of which are connected to an ancient cycle of tithes. Each year, the Israelites were expected to bring one-tenth (a “tithe”) of their fruits to the Temple in Jerusalem, where they were offered to God and also helped sustain the priestly class and the poor. Since fruit from one year could not be used to tithe for another, the Rabbis had to determine when a crop year would begin and end. They chose the month of Sh’vat as the cut-off date, for this is when, in Israel, the sap begins to run and the trees start to awaken from their winter slumber, before beginning to bear fruit. Tu BiSh’vat also became the date when trees officially advance a year in their age. This is important as we’re not supposed to  eat or use the fruit of a tree until after its third year, and every seven years, trees have sh’mitah, a year of rest when we’re not allowed to pick fruit or vegetables from them; we can only use what falls from them naturally on their own. 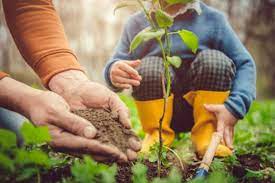 Some scholars hold that this was also a day for planting trees, especially “marriage trees.” It was customary for parents who had been blessed with children during the preceding year to plant special seedlings on the 15th of Sh’vat. Cedars were planted for boys, cypress trees for girls. When the children grew up and married, the trees were cut down and used as part of the chuppah (wedding canopy). Some Israelis continue this custom today.  Learn more about Tu BiSh’vat on the URJ website.