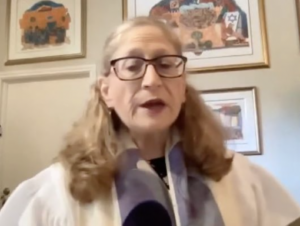 Lisa Goldstein, RJE, MAEd, is Congregation Shalom’s Rabbi. She was previously Temple Chai’s Cantorial Soloist and Educator since 2015, and beginning in 2020, served as Temple Administrator as well. When Temple Chai dissolved and Congregation Shalom was formed, Lisa became our Spiritual Leader as we built our new community. She received her Rabbinic Ordination from the Jewish Spiritual Leaders Institute in June 2021.

A graduate of Brandeis University, Lisa earned her Master’s Degree in Jewish Education from the University of Judaism (now American Jewish University). Following two years as Director of the Central Region of United Synagogue Youth, she has served as Educator in Reform congregations since 1988. Lisa enjoys teaching both children and adults, as well as creating engaging programs for all ages. She has a long-held love of all genres of Jewish music.

​When not working, Lisa enjoys cooking, reading, movies, following her Boston sports teams and the Spurs, visiting local wineries with her husband, Maury, and spending time with friends. She is a diehard Olympics fan and can be found glued to the TV for two weeks every two years. She also has a cottage business called Challahluya! specializing in challah and other holiday baked goods.

Lisa and Maury are both originally from the Boston area and moved to San Antonio in 2011. They are the proud parents of two adult children and their spouses, Ken and Brianna, and Missy and Rob, and doting grandparents to their adorable grandson, AJ!