Purim is one of the most joyous and fun holidays on the Jewish calendar. It commemorates a time when the Jewish people living in Persia were saved from extermination.

The story of Purim is told in the Biblical book of Esther. The heroes of the story are Esther, a beautiful young Jewish woman living in Shushan, the capital city of Persia, and her cousin Mordecai, who raised her as if she were his daughter. Ahasuerus, King of Persia, held a banquet in Shushan and ordered his queen, Vashti, to come and dance before his guests. She refused to appear and lost her royal position. 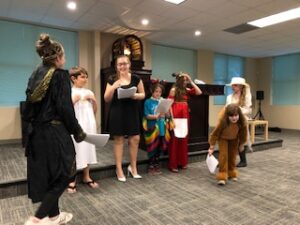 Acting on advice from his counselors, Ahasuerus held a pageant to choose a new queen. Mordecai encouraged Esther to enter the competition. Esther won but, following the advice of her cousin, did not reveal her Jewish identity to the king. King Ahasuerus loved Esther very much.

The villain of the story is Haman, an arrogant, egotistical advisor to the king. Haman hated Mordecai because Mordecai refused to bow down to Haman, so Haman plotted to destroy the Jewish people. Haman told the king, “There is a certain people scattered abroad and dispersed among the peoples in all the provinces of your realm. Their laws are different from those of every other people’s, and they do not observe the king’s laws; therefore it is not befitting the king to tolerate them.” (Esther 3:8) The king gave the fate of the Jewish people to Haman, to do as he pleased to them. Haman planned to exterminate all the Jews.

Mordecai persuaded Esther to speak to the king on behalf of the Jewish people. This was a dangerous thing for Esther to do because anyone who came into the king’s presence without being summoned could be put to death, and she had not been summoned. Esther fasted for three days to prepare herself, then went into the king. He welcomed her. Later, she told him of Haman’s plot against her people. The Jewish people were saved, and Haman and his 10 sons were hanged on the gallows that Haman had prepared for Mordecai.

The book of Esther is unusual in that it is the only book of the Bible that does not contain the name of God. In fact, it includes virtually no reference to God. Mordecai makes a vague reference to the fact that the Jews will be saved by someone else, if not by Esther, but that is the closest the book comes to mentioning God. Thus, one important message that can be gained from the story is that God often works in ways that are not apparent; perhaps in this story, God could be found in Esther’s courage to stand up for her people.

There are three commandments for Purim: to hear the megillah (the scroll of Esther) read, to give gifts of tzedakah (money, food, clothing, etc.) to the poor, and to give gifts – mishloach manot, usually consisting of hamentashen, other sweet treats, fruit, maybe a small toy, and some coins to encourage giving to tzedakah – to our friends. Some other traditions are to have a Purim Shpiel, which is a fun play, loosely based on the Purim story; to dress up in costumes for the reading of the Megillah and/or Purim Shpiel; to use greggers (noisemakers) to drown out the name of Haman each time it is read; and for the adults, to drink until you can’t tell the difference between Mordecai and Haman – but be sure there’s a designated driver! In Israel, Purim is celebrated in all these ways, in addition to a big parade called Adloyada, where everyone boinks each other on the head with small plastic squeaky hammers!